CAVIAR- AHHHHH AT HEATHROW TERMINAL TWO, AND PRADA CATS-EYES, AND BRACELETS THAT TELL YOU WHAT YOU'VE BEEN DOING ALL DAY...AND ...

I attended the 'launch' of the retail park at Heathrow Terminal Two today.  Held at One Marylebone - so pleased I looked again at the invite as I would have driven to Heathrow Terminal Two instead, I braved the tube strike, walked a bit in the sun and met some very interesting people who told me that the nightmare that is currently and has been nightmare for years at the terrible Two, will end on 4th June.

John Lewis (never knowingly undersold) rubbed shoulders with Cath Kidson (too twee for me), and Pink shirts where you can order tailor made and get it delivered all via touch screen app.  Very clever, thought it was initially gimick but this will catch on.

And then to Sunglass Hut - so what suits me - Prada does. Devil wears it and so does Ms T - well for ten seconds anyway.  Sunglasses that are a bit cats-eyes shape are in, which is good because I'm told I look like a cat anyway (better than looking like a dog I suppose).     I always buy sunglasses there (genuinely).  Airports are the only place where I have 'time'.

Then to Dixons who showed me a £5500 camera that you could make a Hollywood film with, and a bracelet for £100 which tells you what you've been doing all day.   Beats a diary.

I had a five minute break for manicure (I have no nails so it didn't last long) and then onto the lounge which for £38 for two hours any one can go. Food, drink and business links and you don't have to work for a bank to get the business treatment.  Entrepreneur (and ex Lehmanns banker) called Song Hoi See created it and pushed hard to open up a market which so reeks of common sense amazed it wasn't done sooner, but he had to push.   "I had five meetings" he says grimacing.  But you did it!!!

Then onto the foodie bit.  Now I avoid World of Whisky but a lovely man told me all about whisky and showed me a £5000 bottle of whisky which was a collectors item.    I didn't drink any and I don't drink on planes or at airports, but I've tasted some wonderful stuff (with Nick Nairn in Edinburgh).

Caviar House is also one I usually give a miss. But not any more.   I met Natalie Rebeiz, Company director of Caviar House and Prunier.  She reminds me a bit of a female version of Branson in that she sets the tone by being there, not hiding behind PRs.    She put a dollop (£15 worth I should imagine) onto my hand and showed me how to eat it.   "Smell your hand" she said, "it should smell of nothing."

It did smell of nothing.   "That's good, that means it is fresh. If it smells of anything don't eat it."

"What happens if you have already eaten it?"

I am going to do more on the fascinating world of Caviar for some articles which you will read elsewhere.      Title of next novel "Meet at the Caviar House" out at Christmas - looking for a title and got it here.

And then onto the four women who were starting up their own restaurant serving food with excellent ingredients.  They looked wonderful. See how they look having dealt with harassed passengers wanting food yesterday with fractious children..

And the brewery creating beer just for Terminal Two (Fullers Brewery Chiswick, London Pride), called Wingman.  Like it but it doesn't like me.

And Heston, who was there, who has set up The Perfectionist, a restaurant serving the best in English eccentricity, where you can have liquid nitrogen ice cream and fish 'n chips with the ultimate crunchy batter.  I definitely definitely think he should do snail porridge for breakfast.    Definitely.


Posted by Sarah Tucker Author at 12:35 No comments:

more all-girl 'be happy' photos from Oxford and my wonderful wisteria. OMG I am putting photos of plants on here. 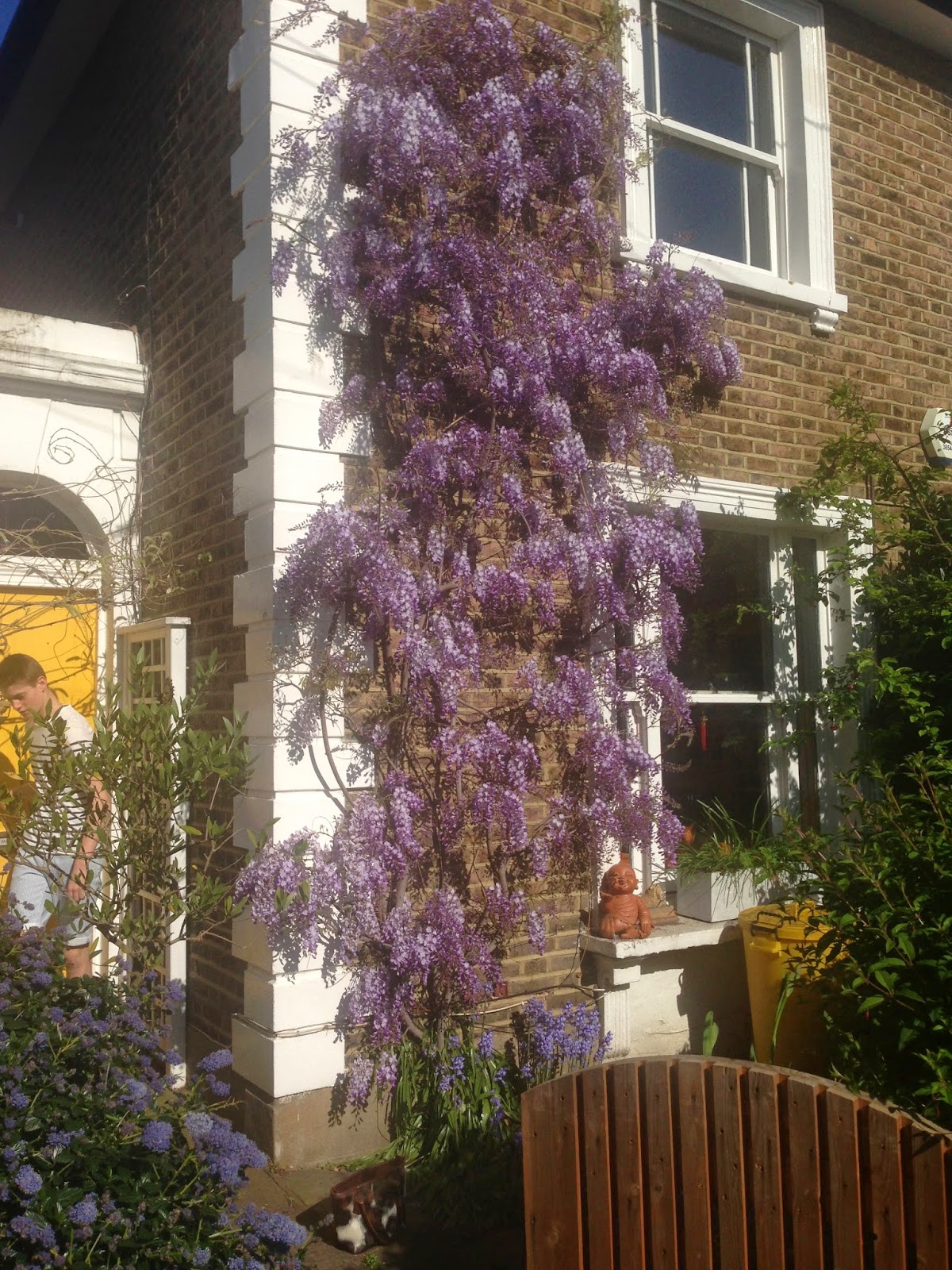 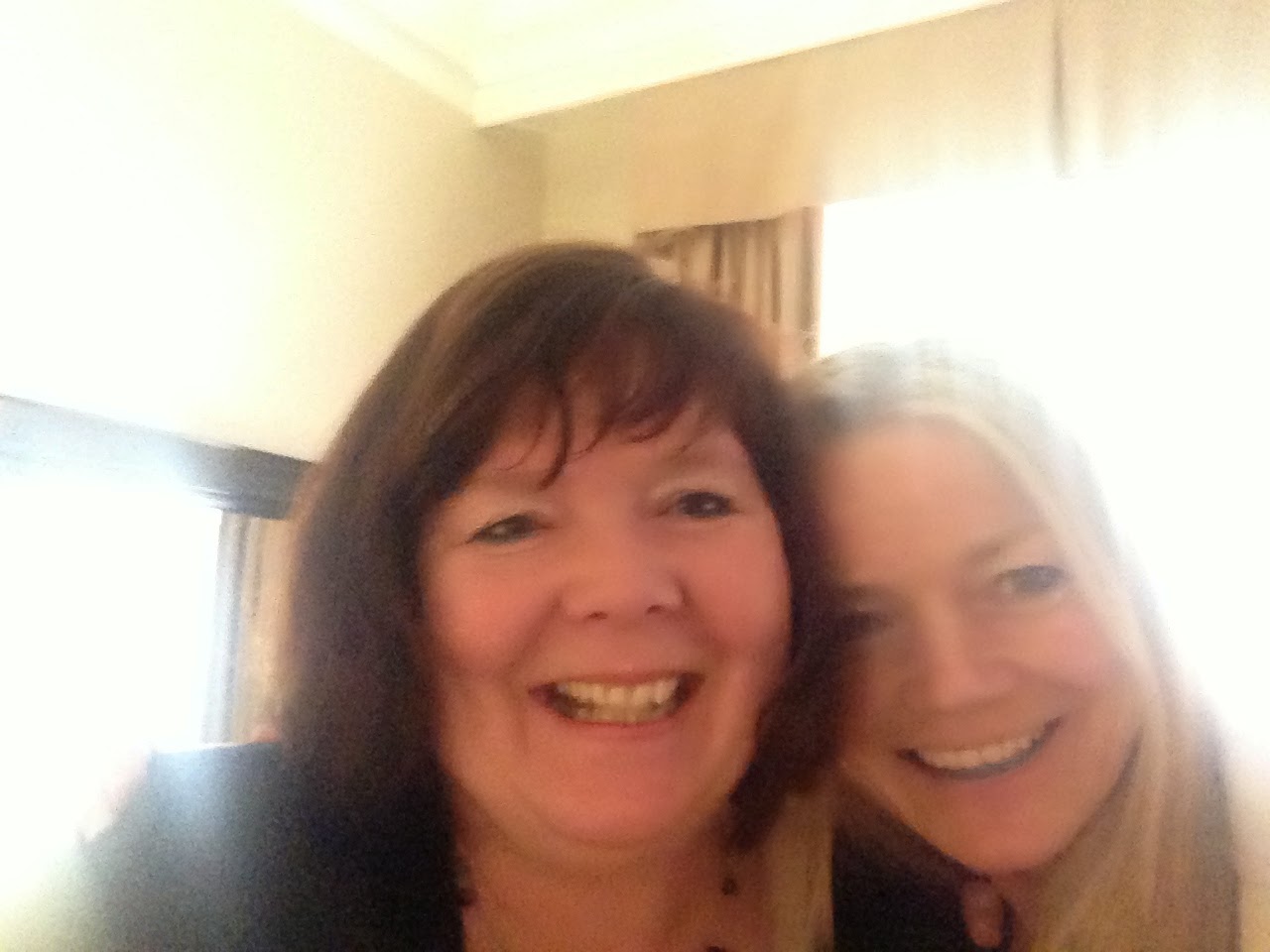 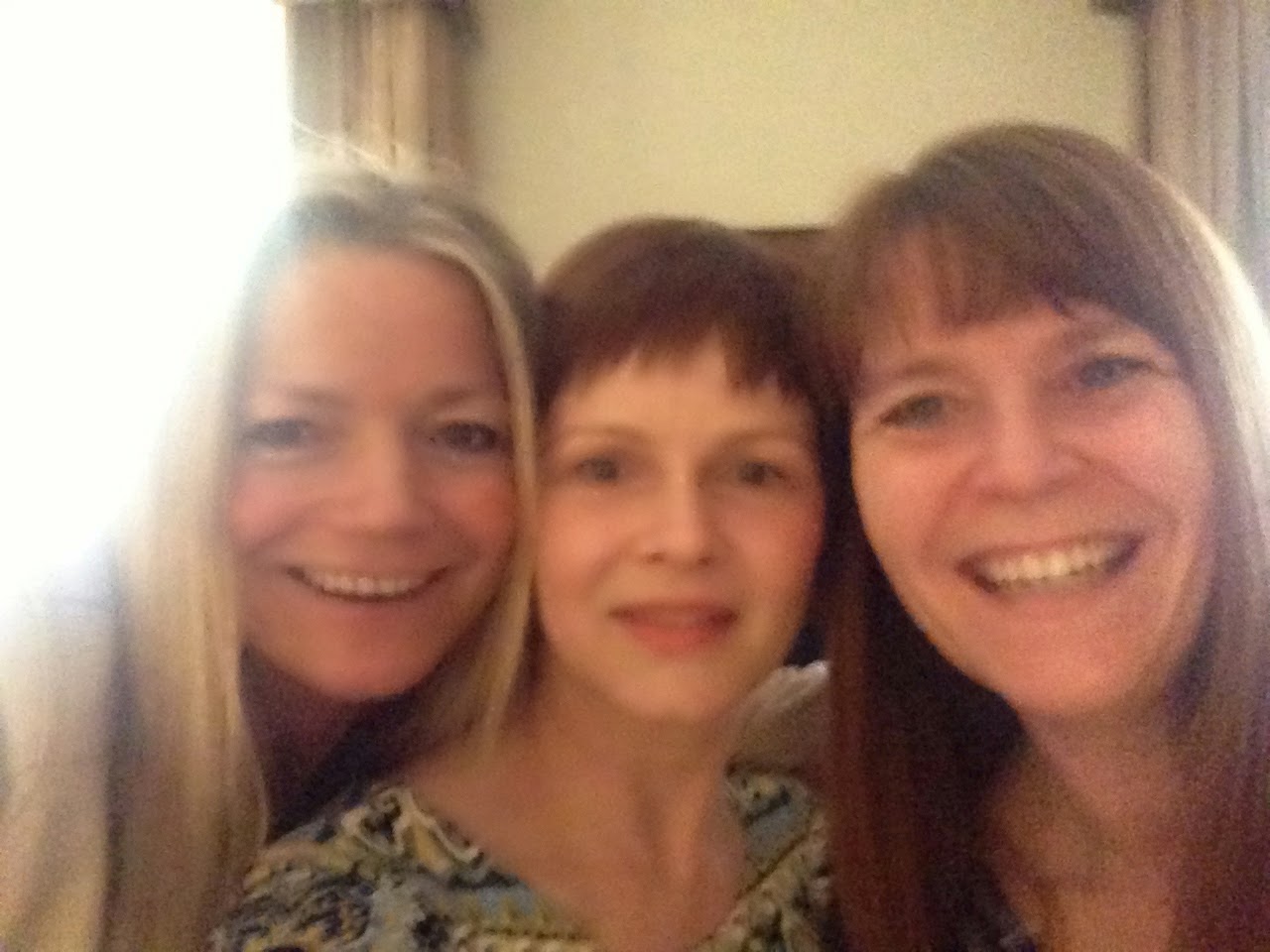 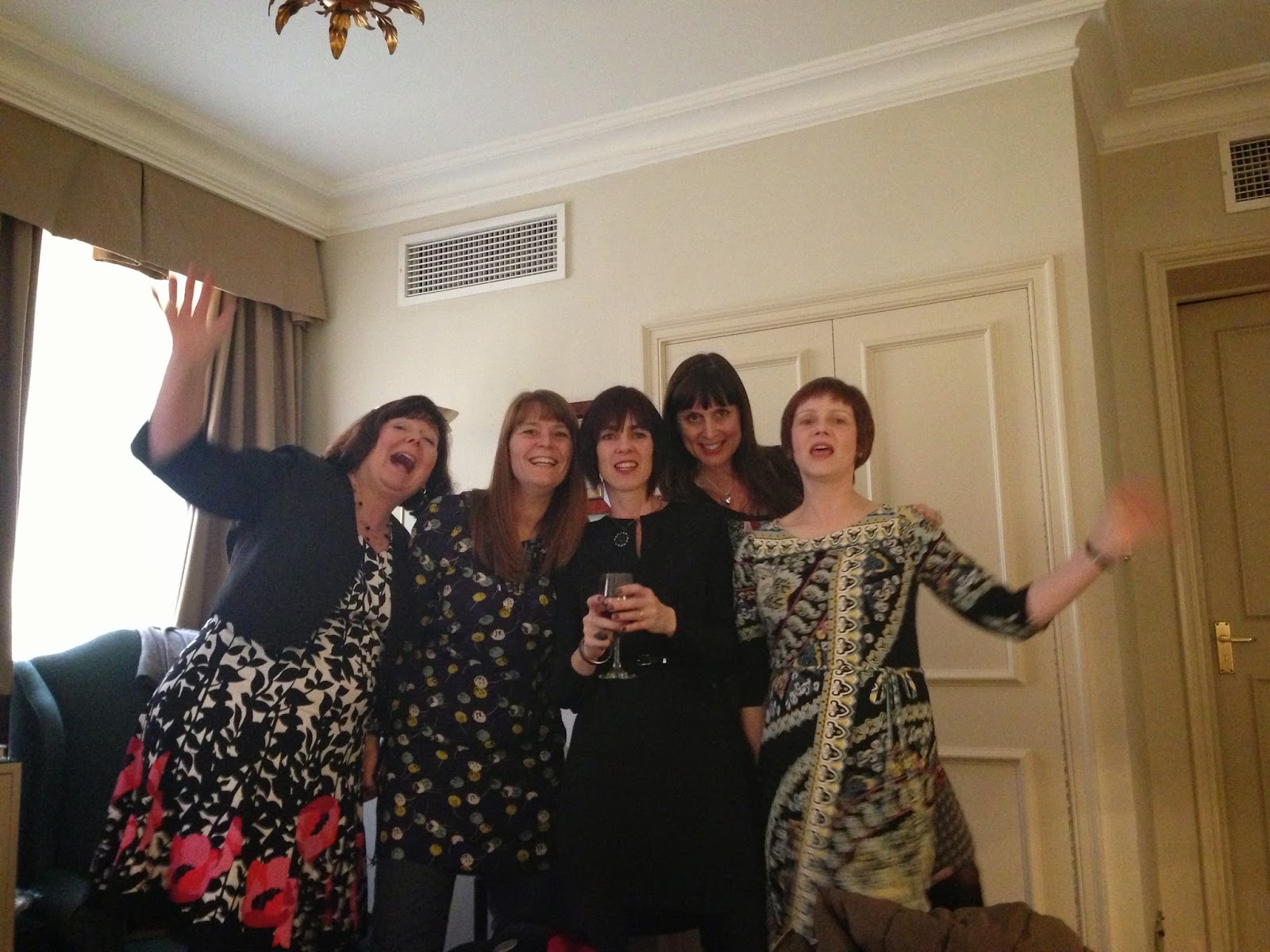 but it is very pretty and smells beautiful every time I walk in/out the front door.     I love Spring.

Posted by Sarah Tucker Author at 07:57 No comments:

Russell Crowe playing Noah, and lead singer off Elbow.   Watched the first at the cinema, the second at the O2. Both v good.    What do the two have in common?   My son says his father looks like both but sings a little more like one of them..
Posted by Sarah Tucker Author at 16:56 No comments: 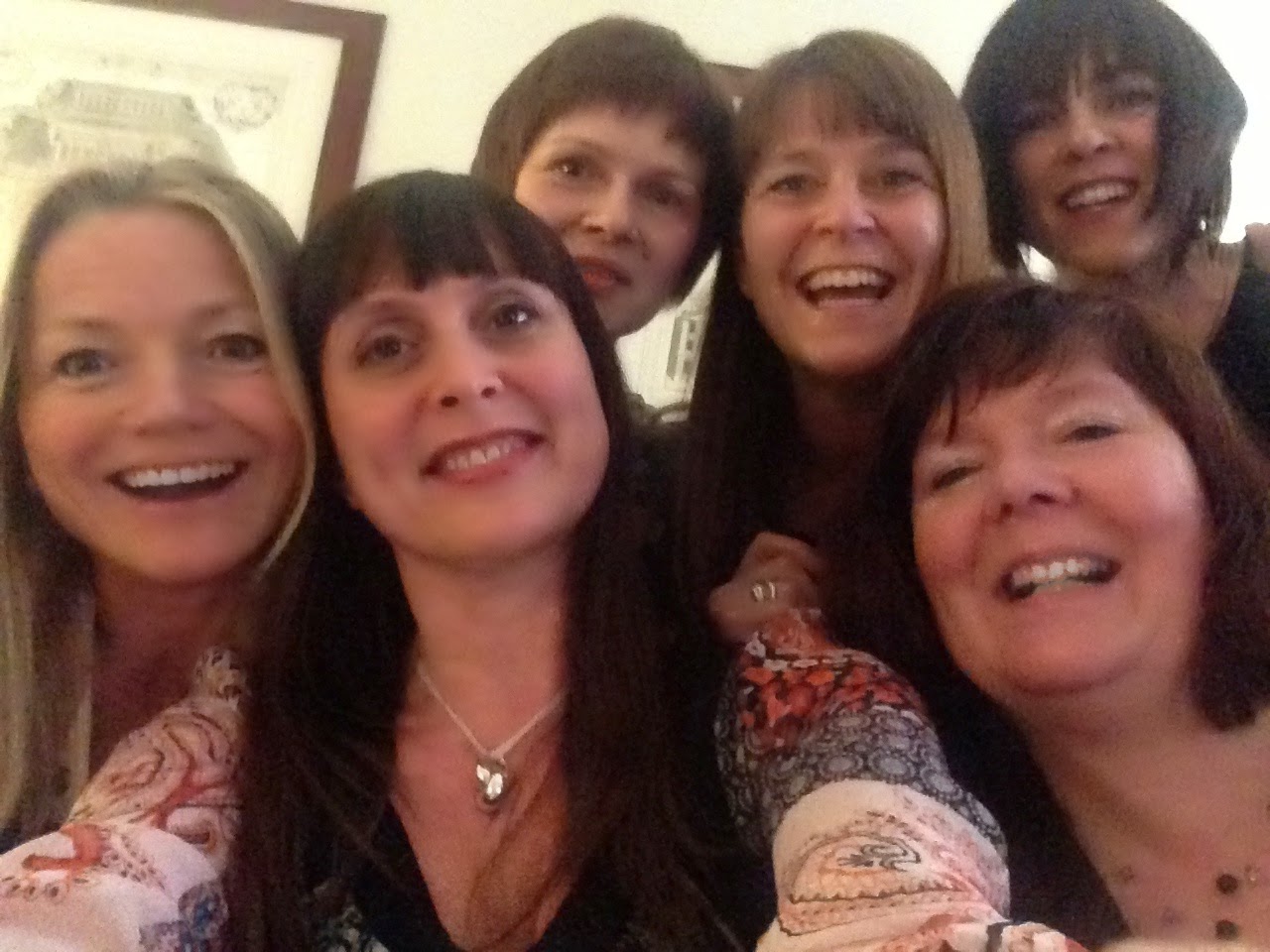 My wonderful, fun, lovely school friends, I love you all.    Hotel may have been fusty but the company was brilliant and you are incredible women all of you.   I'm so very lucky to know you. x
Posted by Sarah Tucker Author at 16:53 No comments:

Had a lovely weekend in Oxford.   Walked round St Johns College which is allegedly the richest in Oxford (Blair went there) and so everything is heavily subsidised.    Wonderful college.  More intellect and geekisim in that square mile than most on the planet I would imagine.   Didn't see anyone walking around with a teddy bear, being murdered. Visited Ashmolean and gazed at Cezanne, a Van Gough and a Lautrec.

Lovely meeting up with school friends I've known since eleven. We know each others history and know if things are OK whatever the other is saying. Its irrelevant really if we say its good or isn't. We know the truth. Thats what long friendships are about. An almost telepathic knowing that whatever is said, we know who each other is.  Words are superfluous.   More so, because we trust each other.  More than we do ourselves.   I think, thats rare.


Posted by Sarah Tucker Author at 12:18 No comments:

END OF THE WORLD IS NIGH..but let me do this first...

What a week.   I'm home on a Friday night, smelling lovely, facial, hair looking as though a comb has seen it and I've been blown out.  True they may have got the wrong pub, but at least I chose one this time at the end of the road and am using the time wisely to write up the psychology essay, think up next book strategy and pitch some more ideas.  Everything, as the hypnotherapist says Ailsa, is amazing and life is great.

Week has been odd. Peaches Geldof is dead.  I didn't know her, and don't know anyone who did but was shocked in a quiet sort of way.   The woman who wrote Adrian Mole is also dead and a few others died as well. Lots of deaths. There always are.   More people will vote for Nigel than Nick allegedly.  Pistorius cried a lot in court.

Finished the in-house magazine for five star luxury travellers for Sovereign Holidays. Loved editing it.  Wonderful job.   The Devil Wears Prada but the clients of Sovereign do not. The Prada PR (in my opinion) sucks.

I met up with my first boyfriend (ever) and the guy who lived above us in the flat we bought. (Bairstow Eves, horrid people 'in my opinion').  He gave me photos of how I looked in my early twenties.  I was Diana Spencer but with brown hair.  God, it was ageing the styles then.  Forget wrinkly of Richmond, we all look so much better now than we did then.

Don't know what the name of the nightclub was.   Absolute dump.  Everyone was having fun third party with iPhones, telling people they were having fun but it wasn't fun. It was cramped, no one could dance, drinks were extortionate and the dancers were dressed like gimps. Masks the lot.  And they didn't even dance very well.   There were these girls dressed like a poor person's cat woman with sparklers that would come round every five minutes and singe anything that got in their way with a tray of multi coloured slushes which probably had a dab of vodka and some piss in them. And there was this guy - presume it was a guy- who wore these very large polystyrene heads.   It was very very odd.  I suppose interesting uncomfortable odd.

And there's supposed to be a big eclipse next week and the Daily Express says the end of the world.  So I must get the essay done.   And I'm seeing Tom before I go.  And the heating and hot water are now on. And I've had a wonderful facial and am soooo looking forward to going to France and Lake Como over the next few months.    And my editor likes what I've written about the Yukon.  And I went to an event in Covent Garden in the pouring rain.    And someone's coming to sort out the trees in the back garden.   And lots more good stuff I'm not gonna share and have got to fit in..just in case.


Posted by Sarah Tucker Author at 12:53 No comments: