All the world's a stage

interesting times as the world increasingly seems like a dystopian novel of characters, none of whom you can relate to or want to know of. like nightmares coming alive, characters appear the grotesque exaggerations of spitting image puppets - the strings being pulled by greed, hatred and above all fear. the media are swaying more easily than Gove does which is saying something.  and politicians, having wished for transparency are regretting it now as they are all coming across as the boring boorish and vacuous individuals they are, but then again, so are the various medas. men are fearful and are hitting out at the people they know who are able to take it and are stronger than them - women, and the women are wondering what is going on, having lived in denial about the incipient misogyny which never went away, only had a thin veil of civility pasted over it.    women have been allowed out of the kitchen but no thanks to their men, but to the technology which has allowed them that freedom.   if we were to have another world war, the women would take over the world, and that would not be a bad thing.   pity. I like men. I just don't think many of them are very good at being one.  but then the role models are appalling.
I visited an interactive theatre in a friend's home on Saturday evening.   it as a performance of the vanek trilogy, which was part playground mafia, part ealing comedy, and part political commentary on life, love and human nature.  sounds heavy and obscure, but it wasn't thanks to a cast of four who tried their hardest to stir up comment, emotion, anything from an audience who seemed deeply suspicious of what to say - either because they thought it was part of the game and couldn't say anything, or like some listener who had taken the courage to phone into lbc, would look stupid if they decided to open their mouth.   I became as fascinated by the reaction or inaction of those sitting in the room being an audience who refused to speak up, even when the characters in the play were provoking comment, they remained silent.     I started to talk and then perhaps thought I wasn't meant to, but you know me - or think you do - and I asked questions and gave opinion, trying to remember what my character was meant to say - a character who was a writer, who believed they were having their phone tapped and wasn't being published.   I smiled when I read my 'character' as it appealed to my paranoia, but then again, I think it was meant to.   The play was meant to engage the audience - there was even some nudity and how to save the world debate, a bit like reading the Sun I suppose, in the comfort of someone else's home, but it failed to stir a predominantly Richmond audience who were unsure of how to behave, and forgot they could be real. or perhaps they were being.   that was what made me curious.  were they really this fearful or were they just pretending to be.  I can never tell these days.
for those interested to know more about the interactive theatre contact www.czechcentre.org.uk 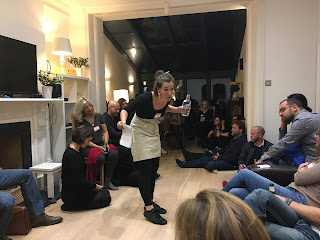 and the 101 company who were excellent and chatty. I'm posting a podcast I did of interviewing some of them afterwards. ironically theres a lot of noise in the background because the audience became very chatty afterwards.  its amazing what happens when they feel no one is listening...
Posted by Sarah Tucker Author at 22:30 No comments: