UP IN THE CLOUDS 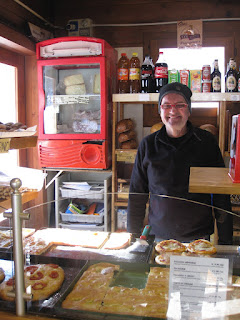 All thoughts of Sainsbury's completely messing up my order have long gone. It's not the fact they messed it up that annoyed me, it's the fact that I got annoyed that they messed up. Life is bigger than that. One should never worry about the petty things in life, only worry about when you start to worry about them. I can talk with such clear philosophy, such benevolence, as I'm in the tiny Italian resort of Gressoney, Italy, about 2 1/2 hours from Milan. it's already been an eventful trip (as I will tell those I write for).

Heathrow Terminal Four is rubbish. Not as bad as Luton but really quite rubbish. If there were such a thing as airport rage, it would start here. Or perhaps at that stage I was still in Sainsburys mode. I think the people who work for Sainsbury's online help desk also work for Costa and WH Smith at Heathrow Terminal Four. They should have a death match. The queues I kid you not were 200 strong in WH Smith and all I wanted was a stamp and by the time I got there I had two shampoo and conditioner miniatures, tissues (have stinking cold) and forgot to ask for the stamp. Costa had 85 (Tom counted) but at least they served quicker and the smile was apologetic when they finally served.

And then I arrived at Milan, where Lawrence Delalio was sitting, looking disgruntled as he had been (allegedly) bumped off his flight and thanks to contacts had got a flight to Milan and then was due to fly to Rome to see the game (Italy played well I am told and should have won. Surprisingly the Brits here told me that as well as the Italians), Any way, arrived, expected that dreadful long queue for ski boots, skis, helmet. and dragging the ruddy things for miles to and from the hotel and then to the bus. No queues. No queues for food (all of which is wonderful at the Hotel DuFour (three stars but deserves two more), and thanks to stinking cold spent first day nordic walking (aka walking through deep snow along idyllic valley), past little churches, wonderful bakery owned by Camillo who is like an Italan Yves Montand but he can cook, who gave me a taste of his wares and very nice they are too....