WRINKLY OF RICHMOND LOSES SOME OF HER LINES IN IBIZA..

Two days in Ibiza at the Magic Mountain Resort where I'm hoping to do a series of special yoga/detox retreats with the lovely Ute next year.   This is the third time I've visited the island in consecutive years and as everyone I've met over the past decade has presumed I've been, danced and got the T shirt in Ibiza because of the way I act and dress (and I never had) -  I was intrigued to see where people feel I somehow belong.

First time I visited was on a family holiday. As family friendly destinations go, it's good but you could be anywhere hot and sunny with a beach and banana boat.  You don't see, or I didn't see anything that made the island different from any other family friendly resort.  Perhaps that's because children want to be by the pool and the beach.

The next time was to the club scene, huge rooms full of high people desperate for fun, swaying in Demonic style to a DJ, a dot in the distance with lazer beam lights all over the place, acrobats, and dancers gyrating hips on pedestals looking very flexible and very bored to music that sounds incomplete and unable-to-dance-to.  Away from the red bull buzz, in the afternoons, I had a taste of the authentic, old Ibiza, in little coves and a boat ride which was bumpy but when we stopped in a cove to swim - it was bliss, and that made me want to revisit the place.

This time the visit was very brief and I went by myself to work and meet people but also to go into the mountains north of the island and experience what those who have lived there for many years say is the 'real Ibiza'.   I stayed not far from Sant Juan, or Sant Joan, I think it's spelt both ways there.  It's a white washed little village that initially I mistook for the village where Bar Anita's and the hippy market (not the really big one) is located. They all look the same.  Every camino leads to a villa or another white washed village.   There's always a sense of getting lost here.  Or I felt always a sense of getting lost here, which may not be the same for everyone.    There's a lovely edge to St Juan. It manages to be authentic and trendy.   A moody bar, an Italian restaurant with wonderful paintings and whimsical musings (see pix) and even the church has a funky Jesus out the front.  No traditional painted porcelain for this place.   I met Larah, who runs a company called Ibiza Retreats, identifying the best therapists and retreats on the island.   She told me how Ibiza is attracting gurus from all over the world.   How it's a 'scorpio' island - it stirs emotion, it's a 'she' and gives everything to those she likes and gets rid of those she doesn't - or is it the other way round - that those who don't like her don't return?   And that she's got a sting in the tale but stings herself, or likes to sting herself, so has a masochistic quality, is highly sexed, selfish, self obsessed, secretive....  Perhaps I'm thinking too deeply here.....   She also happens to be extremely beautiful and soulful.

I walked a lot and people/view watched as the locals do.   It reminds me of the South of France, not Spain, or Italy, but France and the electrician who visited told me how it originally was a part of France (I have yet to check this fact) but if it's true, I can see why. It has the same energy and smell and look of Southern France.  As for the clubs,  I initially felt after this visit, they were out of place on an island where people don't talk about the climate and the traffic as we do here, but about emotions all the time. Everyone talks about emotions, their emotions, other peoples' emotions, lack of emotion, emotion is cool on this island - the more the better, drug induced or not.    Larah gave me some healing. I cried.  Everyone I'm told cries.  Perhaps that's the sting. 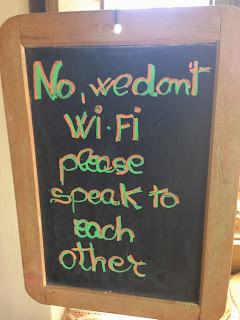 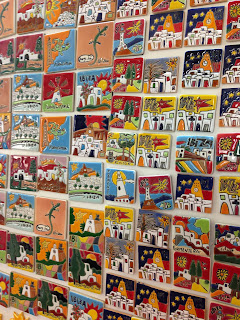 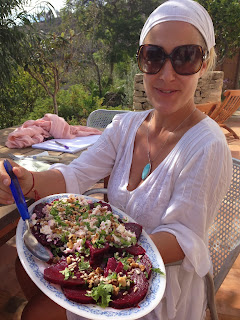 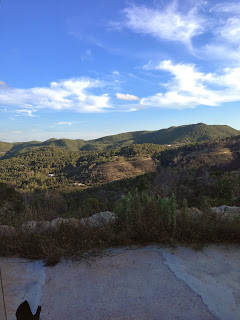 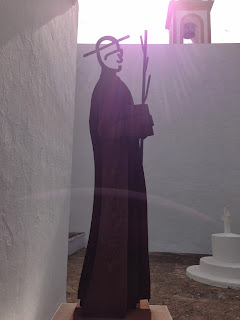 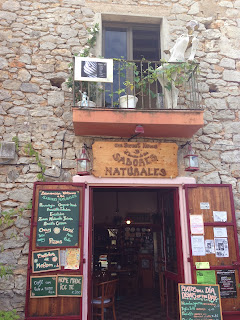 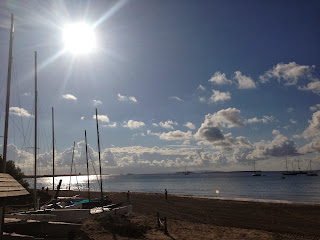 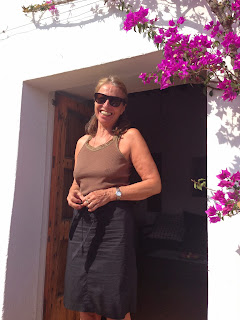 Posted by Sarah Tucker Author at 16:36